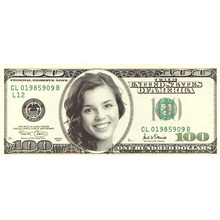 Put your face on a 100 dollar banknote online

Wonder how to create your own dollar bill? Try our fake money generator. This simple online tool lets you quickly create custom money with your own portrait on it. Or would you prefer to see your kid’s or even pet’s face on a hundred dollar bill?

The United States one hundred-dollar bill (referred to as "Bens", "Benjamins" or "Franklins") is a denomination of US currency featuring statesman, inventor, diplomat and American founding father Benjamin Franklin on the obverse side. However with our cool face in hole photo editor you can also have a chance to see how well your portrait looks on a hundred dollar banknote.

There are many things you can do with fake hundred dollar bills. If you have kids, you can teach them about buying, selling, saving and budgeting, as well as simple addition and subtraction. You can also use them to replace old, worn play dollars in a board game or to make your own homemade board game. Or you can pay your children in play money for special achievements or added jobs around the house (outside of normal chores of course), allowing them to trade up for the real stuff when they reach a certain amount. It might also be a good idea to print out one-side play money with your face on it to make bookmarks, gag gifts, origami or other paper crafts. Some people would like to amaze their friends with this dollar photo joke posting it on Facebook or other social networks and thus getting lots of likes and comments.

Use our $100 dollar bill template to give this fake money some "personal" feeling putting your image on it. Not sure how to make your own dollar bill? Just upload your close-up portrait and put your face on money online in a click. If you are eager to enlarge your collection of personalized currency, have a look at our other money templates where you can find face in hole banknote templates of different countries.