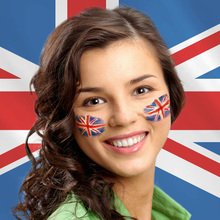 Get a british flag face painting to express your patriotic feelings for any event in the United Kingdom! This online template will help you to make a great fan face paint, so don’t waste your time with real paints!

Are you a fan of UK who has all this stuff in the colours of Union Jack? Or you need a patriotic face paint for sports or national events in United Kingdom of Great Britain and Northern Ireland? You can make a free virtual uk face paint for Olympics games, or for Queen's Official Birthday!

British football fans can also put a UK flag on their face. The flag consists of the red cross of St George of the Kingdom of England, the white saltire of St Andrew for Scotland (which two were united in the first Union Flag), and the red saltire of St Patrick to represent Ireland.

British flag face painting helps you to paint your cheeks with Union Jack whether you are fan of Scotland, England or Ireland! By the way, patriots of England can also use the Flag of England template to get a realistic patriotic face paint.

So upload your portrait pic and let Funny.Pho.to automatically apply british flag on your face. It’s easy as 1-2-3! So keep calm and make UK facepaint!