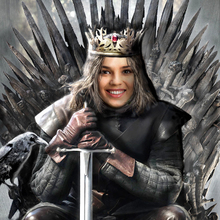 Do you watch the Game of Thrones TV series? Would you like to amuse your friends sharing a profile picture where you sit on the iron throne of swords? Make a Game of Thrones collage using this face in hole photo template.

Do you like the work by J.R. Martin and HBO!? The Game of Thrones series has gathered lots of fans. Everybody wonders who will win the battle for the iron throne of Westeros: will Lannisters keep it or it will belong to Stannis Baratheon, Daenerys Targaryen or even to a boy or girl from the Starks family.

Do you want to become a king or a warrior and take the throne of swords this Game of thrones face in hole photo template lets you sit on the iron throne from the Game of thrones TV series and become a king of Westeros. Only in photos, of course, otherwise it could be dangerous. Pretend, that you are Ned Stark or a lost heir of House of Targaryen and take the throne of iron.

To make a Game of thrones collage, upload your portrait photo and get on the cover of the best fantasy TV series where everybody spills blood to win the uncomfortable iron throne, made of swords and the Crown of Westeros. If you are not interested in the iron throne, you can still put on the kings crown.