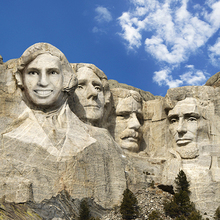 Make your own Mount Rushmore and have fun with your friends!

How d’you feel about being carved into Mount Rushmore? In just a few clicks you can join the greatest US presidents on the National Memorial and enrich your collection of photo jokes.

More and more people rush to South Dakota to take pictures of Mount Rushmore Monument and marvel at presidents’ faces. The carving of the National Memorial involved the use of dynamite, followed by the process of "honeycombing". The Rushmore mountain is also called the Presidents’ Mountain, the mount of four presidents of the USA: George Washington, Thomas Jefferson, Theodore Roosevelt, and Abraham Lincoln.

Have you ever wished that it was your head on Mount Rushmore Monument? Sure you have. That’s why we created Mount Rushmore face in hole photo montage so that our users could carve their faces in stone and get amazing images to share with friends. Just in a few clicks the montage allows to make your own Mount Rushmore and put your face next to the faces of presidents on the mountain. To be more specific, your face will replace George Washington’s face on the memorial.

Each year Mount Rushmore is visited by millions of people who like to learn more about majestic beauty of the Black Hills of South Dakota, their history and historical importance. Everyone knows that Mt. Rushmore has plenty of fun facts, secrets, jokes and unusual stories. For example it has a 50-foot tunnel in a crevice behind Mt. Rushmore, envisioned as "Hall of Records" where copies of important US documents and artifacts were to be stored. It was never completed as envisioned though. As for jokes and riddles, the most known is ”What Rock Group has four men who don’t sing?”

And with this Mount Rushmore face in hole template you have a great chance to come up with your own photo joke about Mount Rushmore: just put a friend’s face instead of one of the former presidents’ and send the picture. It goes without saying that such a pic of Mount Rushmore with a caption will make a perfect ecard for Presidents’ Day!